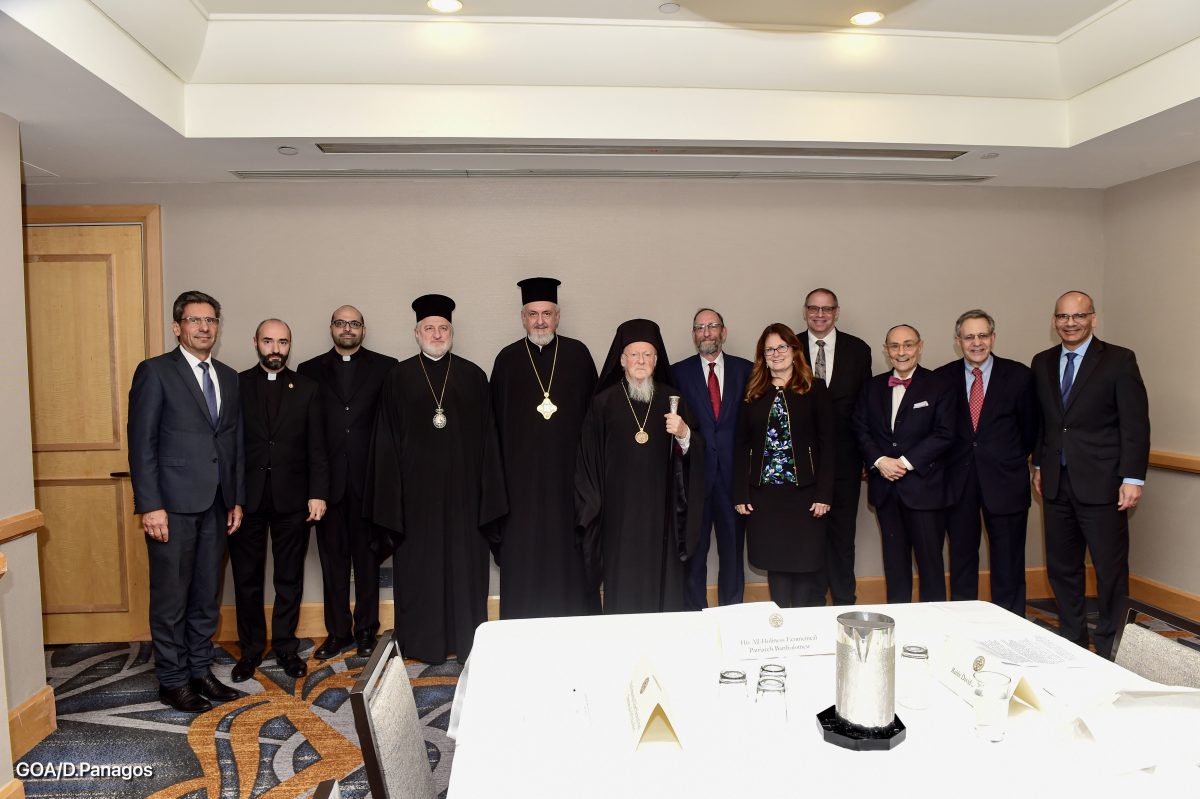 The 11th Academic Consultation between Judaism and Orthodox Christianity took place December 4-6, 2022, in Vienna, Austria. The theme was “Jewish-Orthodox Christian Dialogue: Navigating Our Relations to the World and to Each Other.” The Consultation was co-sponsored by the Ecumenical Patriarchate and the International Jewish Committee for Interreligious Consultations (IJCIC).

The Orthodox Christian delegation to the Consultation was led by His Eminence Elder Metropolitan Emmanuel of Chalcedon. The Jewish delegation to the Consultation was led by IJCIC’s chair, Rabbi Dr. David Sandmel, representing the Anti-Defamation League. The gathering marked the 45th anniversary of the dialogue and was held at the Bristol Hotel in the Austrian capital. The Consultation was coordinated by Rabbi Richard Marker, former chair of IJCIC and the Reverend Protopresbyter Dr. Nicolas Kazarian, Director, Department of Inter-Orthodox, Ecumenical and Interfaith Relations, Greek Orthodox Archdiocese of America.

Orthodox Christian participants included delegates from the Ecumenical Patriarchate and the Patriarchates of Alexandria, Jerusalem, Serbia, Romania, Bulgaria, Georgia and the Church of Greece, as well as from the Orthodox Church in America and Ukraine. Jewish participants included delegates from Austria, Chile, Great Britain, Greece, Israel, France and the United States, with representation from IJCIC’s eleven constituent organizations and denominational and civic Jewish diversity.

The meeting opened with the reading of a greeting from His All-Holiness Ecumenical Patriarch Bartholomew, which stated in part:

The city of Vienna is a fitting choice for this Consultation. While the city has been rightfully known as the “City of Music,” the home of some of the world’s greatest composers, it has also long served as a bridge on the East-West frontier and an important center of Jewish culture in Europe. However, the unspeakable effect that the Holocaust had on the latter reminds us of the importance of unceasingly engaging with those outside our traditions with love and ears to hear….

We thank God that this dialogue in Vienna is a personal encounter between Jews and Orthodox Christians and not a virtual one due to the pandemic, which has claimed nearly 15 million lives. May their memory be eternal! We were blessed to meet in person last November 2021 in New York during our official Patriarchal visit to the United States. That meeting resulted from your series of small meetings that have been constantly committed to sustaining our relationship in hopes of meeting together in person once again. May this meeting in Vienna over the next few days fulfill that hope.

Therefore, let us rejoice in this meeting as a milestone in our long series of academic consultations, now aiding us in understanding our relationship with each other and the world. Let it, so to speak, make the other less “other” and more a part of ourselves…

Let us speak honestly to one another about what is most important to us, what it is we would hope that the other understands better about us.

…In November 2021, when His All-Holiness visited New York to open the doors of the rebuilt Saint Nicholas Greek Orthodox Church and National Shrine, he graciously made room in his busy schedule to meet with us.

As the date for our meeting with His All-Holiness neared, we paused our joint study to focus on practical arrangements for that encounter, and afterwards, on the planning for this Consultation.  That important meeting set the stage for what we hope to accomplish here in the next two days, specifically to create a structure through which we can bring the work that we have done together over the last half-century, but which is little known beyond a small circle of experts, to our wider communities…

An equally important, and perhaps more ambitious goal, is for us to actualize our mutual commitment to a troubled world, a world so in need of the best of what each of our traditions can teach – about the environment, about hostility, and civil society, indeed about “the other” …

Metropolitan Emmanuel conveyed words of welcome on behalf of the Ecumenical Patriarchate:

…His All-Holiness the Ecumenical Patriarch Bartholomew’s inspiring message has indeed conveyed vividly the spirit and purpose of our dialogue. His All-Holiness continues to strongly endorse its ongoing efforts…

Let us therefore come to know each other better by sharing deeply with one another how it is that we determine our relationship with the world and with others. Let this be a growing and dynamic relationship based on trust and friendship. It is imperative that we, as religious leaders and faithful, seek to contribute to this understanding during our consultation and to continue the fruits of our time together back into our respective places on local, regional and global levels…

The Consultation gathered with the specter of world events hovering over the proceedings. The Russian invasion of Ukraine, the subsequent death and devastation, and negative impact upon Orthodox Christian and Jewish communities were palpable. The dramatic increase of antisemitic speech and violence and the inevitable significant concerns communicated by both Jewish and Orthodox Christian delegates was addressed throughout the presentations, with documentation of national and international challenges and description of initiatives to defeat the scourge. The continuing persecution of Christians throughout the world weighed heavily upon the Consultation, as well.

A highlight of the Consultation was the visit to the Austrian Ministry of Foreign Affairs, where the joint delegation of Jewish and Orthodox Christian leaders was received by the Secretary General for Foreign Affairs Peter Launsky-Tieffenthal, with a formal reception. He thanked the leadership of the Ecumenical Patriarchate and IJCIC for choosing Vienna as the location for the Consultation. The local Jewish and Orthodox Christian religious leadership and other Austrian government officials joined the warm welcome.

In response, Metropolitan Emmanuel expressed appreciation on behalf of the delegation:

We, participants at the Eleventh Academic Consultation between Judaism and Orthodox Christianity, co-organized by the International Jewish Committee for Interreligious Consultations (IJCIC) and the Ecumenical Patriarchate, are grateful to the Government of the Republic of Austria for receiving us today…

Rabbi Dr. Sandmel added his own words of gratitude:

It is very important to mark the significance of this occasion. We find ourselves here in this historic city… with the very long history of its Jewish community, which often thrived but at other times there were challenges that we have to acknowledge…

The fact that we find ourselves here at this moment together, and despite whatever differences exist between us, we are united in our concerns for all of the problems that our world faces.

On the first morning, the first of three academic sessions began with presentations on “The Sources that Define Our Relations to the World and to Each Other” by IJCIC Vice-chair Rabbi Mark Dratch, Executive Vice President, Rabbinical Council of America, and the Very Reverend Alexander Rentel, Chancellor, Orthodox Church in America. Rabbi Dratch presented overviews of their respective traditions’ understandings of the other and relationships with secular authorities. Rev. Rentel spoke about the Orthodox canonical tradition. Dr. Gary Vachicouras of the Ecumenical Patriarchate served as moderator.

The first afternoon session, entitled “Living Out the Sources: As a Majority, as a Minority Facing Contemporary Challenges,” included papers by His Eminence Metropolitan Gabriel of Nea Ionia and Philadelphia and Rabbi Lea Mühlstein, the Ark Synagogue, London and International Chair, Arzenu, the Reform/Progressive Zionist movement. Metropolitan Gabriel focused on Orthodox Christian-Jewish relations in Greece and Rabbi Mühlstein focused on Jewish minority experiences in Germany and Britain and the majority experience in Israel. Former IJCIC Chair, Ms. Betty Ehrenberg of the World Jewish Congress served as moderator.

On the second morning, the theme, “Teaching Our Sources and Roles to Ourselves and Each Other” was addressed by IJCIC Treasurer Rabbi Shoshana Boyd Gelfand, Director, Leadership and Learning, Pears Foundation, representing United Synagogue of Conservative Judaism and the Reverend Deacon Dr. Michael G. Azar, University of Scranton, Pennsylvania. Rabbi Boyd Gelfand taught texts which exemplified Judaism’s evolution from antiquity through modernity and Deacon Azar surveyed the history and focus of the Orthodox Christian-Jewish dialogue. His Grace Bishop Jovan of Pakrac and Slavonia served as moderator.

In the final afternoon session, introduced by Rabbi Richard Marker, the assembled divided into groups to suggest actionable proposals based on the call-to-action presented to the Ecumenical Patriarch during his meeting with IJCIC in New York on November 2, 2021. In that document, the work of a joint Orthodox Christian-Jewish Task Force under the auspices of the Ecumenical Patriarchate and IJCIC was presented, laying out priorities for further focus, including: education about the other for seminarians and clergy; Jewish leaders presenting in Orthodox Christian seminaries and Orthodox Christian leaders presenting in Jewish seminaries; reflection on our respective roles as communities that exist both as majorities and as minorities in specific countries; and global issues, such as climate change, threatened populations, and breakdowns of civil society.

This Communique, drafted by IJCIC immediate past chair Rabbi Noam Marans of the American Jewish Committee and Fr. Nicolas Kazarian of the Greek Orthodox Archdiocese of America, was shared, discussed, and finalized by the participants.

At the final session, Metropolitan Emmanuel and Rabbi Dr. David Sandmel offered concluding statements, expressing the hope and optimism engendered at the Consultation and determination to intensify and expand the dialogue.