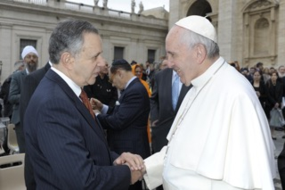 Rabbi Daniel F. Polish is an accomplished author and scholar.  He earned his bachelor’s degree at Northwestern University and completed his rabbinical training at Hebrew Union College in Cincinnati. He earned his doctoral degree at Harvard University.  He has taught at Harvard, Tufts, Occidental College and at his alma mater, Hebrew Union College. A frequent teacher of both Jewish and Christian audiences, he has addressed interfaith gatherings in places such as Warsaw, Seville, Istanbul, Berlin, Jerusalem, New Delhi, and Bangladesh. He is the immediate past Chairman of the International Jewish Committee for Inter-religious consultations —  the official Jewish interlocutor with the Vatican and other international religious bodies. He is a published poet and has written articles for numerous scholarly and popular journals. His book reviews appear regularly in the Journal Of Ecumenical Studies. Among his books are Bringing the Psalms to Life: How to Understand and Use the Book of Psalms; Keeping Faith with the Psalms: Deepen Your Relationship with God Using the Book of Psalms; and Talking About God: Exploring the Meaning of Religious Life with Kierkegaard, Buber, Tillich, and Heschel.

Rabbi Polish has served as a leader of national Jewish organizations: as Associate Director and Director of the Washington Office of the Synagogue Council of America; and as the Director of the Commission on Social Action of Reform Judaism; He has served as a university teacher, and as a congregational rabbi. He is currently spiritual leader of Congregation Shir Chadash, in New York’s Hudson Valley.